Quiet. Pebble beach a short walk through a picturesque nature reserve from a remote Church 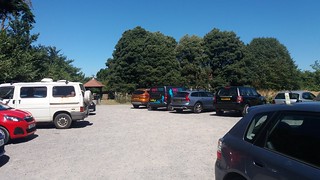 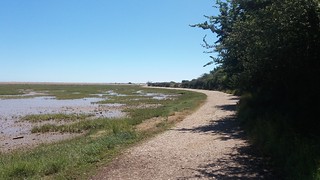 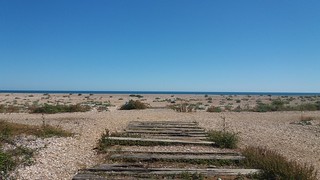 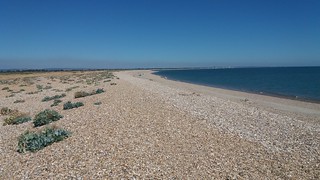 Chichester can be reached via the A29 from London, or the A27 from along the coast.

From the A27 (Chichester Bypass) take the B2145 signposted for Selsey/Wittering. At a junction, go left for Selsey.

Continue, one and three quarter miles after Sidlesham (though it's easy to go through Sidlesham without realising it), and just past RSPB Pagham Harbour, turn left for Church Norton. If you reach Asda (petrol, coffee shop), you've gone about 1/2 mile too far.

Three quarters of a mile down the narrow lane - go *all* the way down it - don't worry you wont end up in someone's garden! At the very end is a small free car park by St Wilfrid's chapel (worth a visit). Note a few spaces next to the church are for churchgoers only.

Walk down the track beside the Norman earthwork and you will find yourself on the edge of Pagham Nature Reserve. Turn right by the harbour edge, and continue all the way to the main beach, passing some wooden sleepers in the ground. The gravel path will then deliver you roughly to the middle of the beach. Its an easy level walk, maybe 500m total. A little pebbley towards the end.

Turn left along the beach and the [undefined] naturist areas starts, say, after about 100 yards. All being well, you are now on the sea side of the bank, with some stunning views across the bay to Bognor Regis and Littlehampton

The south east facing beach is a huge shingle bank, backed by a large flat shingle area upon which rare birds nest. At mid and low tide an area of flat sand is exposed. On the top of the stony bank there are loads and loads of shells - almost more in number than the stones. Its a bit exposed so expect a slight breeze even on a still day. The beach is nearly a mile and a half long and perhaps because the car park is so small it does not get crowded.

Do not swim by the harbour entrance - it has a fairly savage tidal inflow / outflow and you could be very easily be swept away.

Excellent bird watching opportunities - at some times of the year - June for example - some of the beach is roped off as its a bird breeding area.

"A really nice stop off if you are in the area - which is what I would suggest that you use it for."

'Harry' comments:
"just across the harbour mouth at Pagham Spit is a much better naturist beach. It's got a large free car park and the part used by [naturists] is right in front.. of you.

None on the beach.

Please leave a comment via the email address below

Tag and upload photos to the UK Naturist Beach group on Flickr. Photos should be of the beach, or show the way to it. They should NOT have people in them.

These photos, which have been tagged as 'safe', were all taken nearby.