Large, well known, sandy beach backed by dunes and forest, on north Norfolk coast. Access issues now resolved - naturism on beach only, not in the dunes. 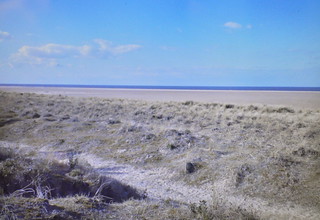 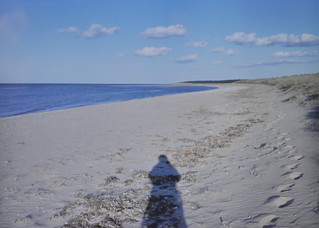 Holkham is a very large and picturesque sandy beach backed by sand dunes and a forest on the north coast of Norfolk near Wells-next-the-Sea. It is part of the Holkham Hall estate, which manages the beach as a nature reserve. The beach is "suitable for everyone but... you have to be ... able to walk some distance".

[Oct 2014] Naturism is allowed on the beach only. Please keep out of the dunes. See British Naturism Holkham Campaign for the latest updates.

However, it seems that this may mean below the high water mark

The west end of Holkham Beach has been popular with naturists for many years. But in July 2013, the landowners (Holkham Estate), acting together with The Crown Estate and Norfolk Police, withdrew its 'official' naturist status, and 'banned' naturism. This was in response to inappropriate public behaviour on the beach. Norfolk Police actively enforced the ban.

But, by the end of summer 2013, The Crown Estate had ended the ban on Naturism on their part of the beach (below the high water mark). Norfolk Police also accepted that ‘Naturism is not an offence’. And in Summer 2014, the Holkham Estate relaxed their ban, and agreed to naturism on the beach only (i.e. not the sand dunes). They have put up signs outlining the naturist area.

During the Winter 2013/14, the dunes were badly damaged by storm surges, so they are off limits while the fragile dunes recover from the damage.

Its a shame that the estate didn't initially try to work with naturists to stop the offensive behaviour. But all's well that ends well. Hopefully, naturists will support this compromise with the Estate, and continue to use the beach only, keeping out of the damaged sand dunes. This article in The Sun newspaper looks at the reasons for the closure.

The A149 coast road runs from King's Lynn via Hunstanton to Wells-next-the-Sea. Holkham village is just west of Wells. The 'proper' car park is located in 'Queen Anne Road'. The entrance road is opposite the Holkham Hall entrance in the middle of the village (can be missed - look for 'The Victoria' pub on the corner). Car parking is £6.50. Having parked, walk through the gate and turm left (northwards) toward the sea.

The easy access path is 1.5 - 2 miles long, past the pond, past the bird hide, past the house and outbuildings until the path takes a slight bend to the right and through a some trees. At this point paths cross - turn right (seaward) and pick your way through the trees. The path is not well marked and is not suitable for wheelchair access. Eventually the path emerges on the edge of the dunes where you will find notices requesting naturists not to use the dunes, but only the beach. Please observe them - this is private land and naturist use is generously allowed by the landowners.

".. a much quicker route via the dunes and a single track road into the nature reserve. The first gate on the left after leaving the car park seemed to be the best route. After about one mile along the road there is a wooden walkway on the right hand side of the road, this is a path for disabled / infirm walkers. Walk along the walkway until you come to the viewing platform at the end.
From here you have 2 options, 1) Walk onto the beach, go to the point on your left and walk along the beach until you see the sign denoting the start of the naturist area. 2) Turn left and walk along the dunes until you see the sign."

As an alternative, it is possible to walk along the seafront from the car park, and then along the edge of the sea shore, out of the large bay, across or around (depending on the tide) the next inlet, and then you'll find yourself at the naturist area. - a good 20 minutes 'slog' along the beach, particularly where the sand is soft - "about as far as I would walk in any heat".

You could park for free, then walk from Wells town itself along the coast path, a good hour's walks. NB the road to the left of the inlet leads to a caravan park with no parking). Or you could walk from Burnham Overy Staithe, also about 5km, along the coast path. There is a small car park about 1km east of Burnham, with a footpath to the beach, but it doesn't save much compared to starting in Burnham itself.

This is an extensive, wide and sandy beach with dunes and woods behind and a nature reserve nearby. 'Bags of space available for bare foot exploring, building sand castles, roaming the dunes and swimming'. The sand is very very fine indeed and full of shells. Another fan of this beach says 'well worth going nearer the sea, but you'll NEED a wind break. The beach is a "typical windswept north anglia beach"- which means there is a constant breeze. Good for families nearer the sea, choose your spot nearer the dunes. The beach IS patrolled by Police and Wardens from time to time to PROTECT the naturists.'

"This beach is really beautiful but can be very windy. There are posts across from the trees behind to the beach itself announcing the Naturist area but these signs do say that naturism is not to be practised in the dunes but only on the beach!"

If you park at the Holkam beack car park, walk on to the beach and head west for half a mile or so - there are wonderful sand dunes and the Queen's bathing hut is in the woods just behind the nudist beach.

There is a new cafe just before the beach with indoor and outdoor seating and toilets (only available when the cafe is open). Extensive inland (not sea) views.

There is a gastro pub near the car park tursnm-off. Best to 'stock up' with everything you will need in Wells. 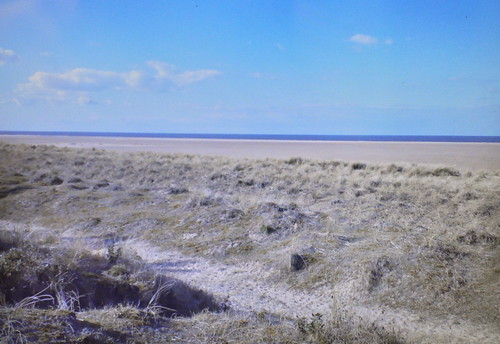 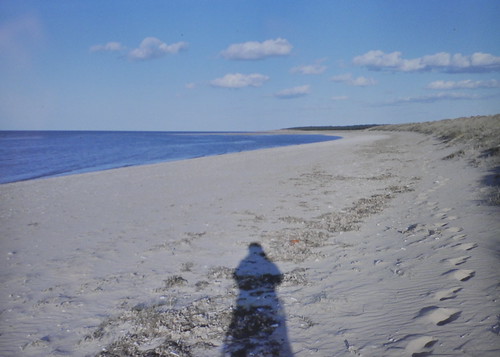