An expensive car-park on a private estate, or a long but easy walk, to a quiet beach. 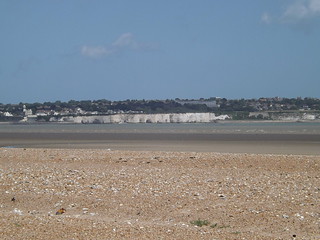 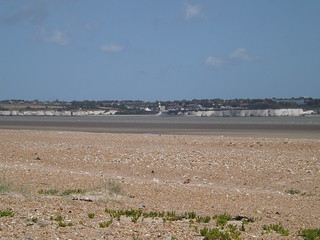 Sandwich Bay is situated on the Eastern coast of Kent, about five miles south of Ramsgate. The beach is a peninsular - cut off by the Stour river to the west and north, and by the sea to the east. The naturist area is at the north end of the beach. It is backed by sand dunes and a golf course. Further north is a nature reserve. There have been some problems in the past with 'unfriendly natives' at the golf club.

There is (as of 2013) a plan to create a long distance footpath in this area, part of an English Coast national path. However this will not improve access to this area. If anything, the coast path plan will make access much worse, with lots of access restrictions as part of the nature reserve.

Access to the beach is complicated by the presence of a 'Private Estate' which levies a toll for use of the roads to the beach and the golf course(s).

From Ramsgate to the north take the the A256 to Sandwich. The A256 bypasses Sandwich itself - which has "a notorious one-way system" - so turn off to reach the town.

From the near the town railway station, take St. Georges Road to the Private Estate, past a turning to Sir Roger Manwood's school. Follow the bends and pay at the toll booth (£7 per day, season ticket £70 for 2012) then turn left and left again. At the seafront drive to the end of the road. Park at the end, collect your gear and prepare to hike for about 15 minutes northwards. There is a shorter route for walkers (45 mins) or cyclists (10 mins) - see the OS map.

From Deal, take a minor road north (parallel to the coast) that becomes a single track across a golf course. This brings you to to the same Private Estate and but a different toll booth. Having paid the toll, turn right then left along the seafront. Look out for 'Golf Road' and signs to a caravan park.

"To avoid the tolls, as you are heading south from Sandwich you will see a road to your left which leads to a golf club, just as you go over a little bridge the road follows a drainage channel - follow that road but bear left and keep going until you come to a farm where you can park. There is a footpath indicated which takes you across the golf course but straight to the nudist section of the beach....dont strip off on the golf course.. the natives are hostile!!"

The whole beach is a long sandy bay. At the Southern end there is steep stone beach which protects a private estate. As you go North and the sand takes over there is a popular family (textile) beach also popular with windsurfers. Going still further North, the road ends and the thin line of dunes starts. Adjoining the whole beach is a golf course and the Members aren't too keen on naturists.

The area (at the north end of the beach) favoured by naturists is a one-mile walk from the Bay's public car parking area.

As the dunes start so the beach seems to become less 'textile' and the further north you go the more naked couples you will find. The line of dunes doesn't afford much in the way of privacy from the footpath but most people don't seem to be too worried. When the tide is out there is a massive sandy beach to stroll along and the beach is said to be well-used despite the cost of access by car and the long walk from the car park to the nude section. Distractions include watching the passing Ramsgate-Dunkirk ferries!

Parts of Sandwich bay are owned by the National Trust and access to some areas may be restricted to protect breeding birds.

Reports suggest that estate security guards are always on the lookout for "flashers" and WILL call in the police. Also, local residents are trying to prevent naturist use of the beach, so BEWARE. To avoid trouble you should walk a long way past the car park - nearly to end of the beach - and keep out of sight of the golf course.

In 2005 complaints from golfers apparently led to a police officer being quoted in an article in the local press [entitled 'Keep your Trunks On'] suggesting that "nudists" should not use the beach and faced "further action" if they did. This, in return, prompted a letter pointing out that:

"The recently introduced Sexual Offences Act 2003 (section 66) makes it clear that anyone, male or female, who is seen naked on the beach, for example, commits no criminal offence in the absence of an intent on their part to offend another person."

As usual bring your own or stock up in Sandwich. 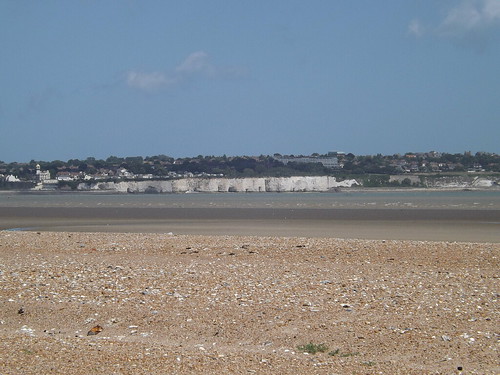 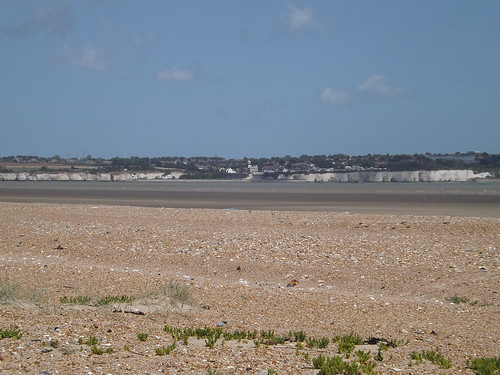