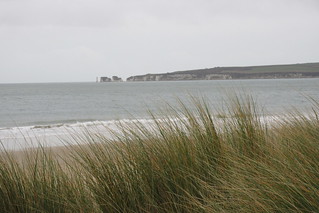 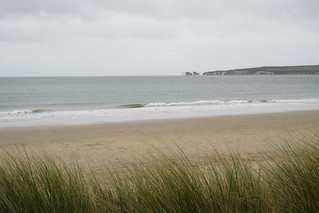 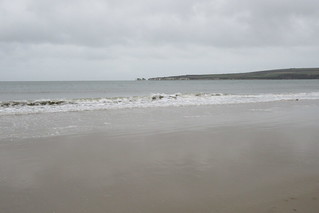 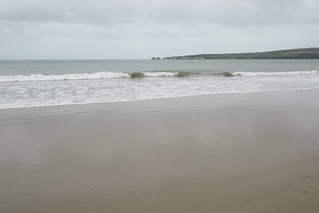 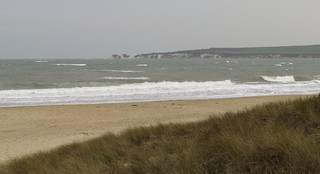 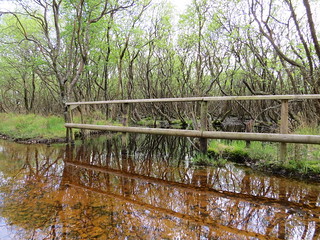 path to the beach

Studland beach is located on the north-eastern tip of the part of Dorset known as the 'Isle of Purbeck', separated from Bournemouth by the entrance to Poole harbour. The naturist beach is the middle mile of a 3 mile long sandy beach backed by sand dunes and heather. The beach is about 20 metres wide. The sea is gently sloping and protected by an off-shore sandbar. Easily the best-known naturist beach in the UK, it has also been voted the "sixth-best beach in Britain".

"The beach was busy (but not crowded) over the 1 mile long naturist, and the sea perfect for swimming, on a sunny day. Many people were sitting at the start of the dunes, about 20m from the sea -- Aug'13

There are signs marking the naturist area. The beach has no shade, and no facilities - the nearest are beach kiosks and toilets a mile or so to the south in Studland village.

Studland is, for most of its length, a traditional textile beach. However, naturists have traditionally used the northernmost part, together with the nearby dunes. Ownership of the beach and surrounding heathland nature reserve passed into the hands of the National Trust. They formed a Studland Beach Users Action Group (SBUAG), which includes representatives of local councils, beach hut owners, naturist organisations and the police to respond to inappropriate behaviour.

The NT placed restrictions on the area once used by naturists, and layed a nature trail through an area of heather behind the beach which once used by naturists, but was also a source of problem behaviour. On the positive side, nude use of the beach is now "offical", there is no inappropriate behaviour, there are sometimes community beach wardens, and the NT is happy to sell naturist ice-cream from mobile vendors :)

This plan originally caused friction between some naturists and the NT, but things seemed to have quietened down. In 2013, the NT increased the size of the naturist area by an extra 50 metres inland, but still away from the heather path.

We want everyone who comes to Studland Beach to enjoy their visit... If anyone witnesses any offences ... report them to [the] Police -- Dorset Police

By Car: Satnav: BH19 3BA There are two main ways of getting to Studland:

[Icarus comments:] "The first time I went to Studland I had heard that it could be difficult to park, and that it's quite a distance from the car park to the naturist beach, so I took a bike in the back of the car, parked in the village and cycled down through the car park and along the wet sand at the water's edge to the naturist section. It would probably be just as easy to cycle along the road towards the ferry to fire point 6 and down the path that comes out in the middle of the naturist section. Other times I've parked on the verge near fire point 6 and walked, but I hear that's being discouraged because of the number of cars being broken into there."

[Updated 2013] For those without a car, take the train to Bournemouth, then get the #40 bus service to Swanage.

The bus goes all the way to Swanage, so on reverse journeys the opposite applies:- stay on the bus past Studland village AND past the main beach carpark access for well over a mile of the toll road to FRP6. The driver should know where you mean - if not, just tell her/him to look out for a large collection of cars parked at the side of the road about half a mile from Shell Bay.

This is a very popular beach and, on a busy day, this would not be the best choice for those seeking solitude. The beach, which faces south-east, consists of sand, with dunes and heath to the rear. National Trust-employed wardens patrol regularly and will move naked people who stray outside the nude area (marked by posts). The beach is regularly cleaned. Behind the nude section the dunes are patrolled by wardens, and there is a nture trail used by textiles.

The beach used to have a problem with inappropriate behaviour, but thankfully, the NT's policy of wardens, reducing the naturist area, and a tourist path through the problem area, has been totally successful in solving the problem.

Because of the ferry and the propensity of bored adults in families to go for a long walk, the nudist section gets a lot of passers by. However they stick to the area immediately in front of the waves and don't interfere. Although there is more seclusion in the dunes, these are perhaps best avoided - for the reasons set out below.

[Kevan comments:] "If you want a particularly pleasant piece of beach at Studland, go where I go. Knoll end of the naturist section - about 50 yards along from the posts. There you'll find nothing but folk enjoying the atmosphere, relaxing, sunbathing, and having a swim."

"... Over the years, I've introduced quite a few people to naturism at Studland ... the beach is (in my opinion) the finest in Britain ... The bay has a man-made spit across it so the water is like a lagoon, consequently it is often very warm. When the tide is right, I've known mediterranean like temperatures there."

"The naturist section has the cleanest sand and water but the sea was a little too cold for comfort.. . No problems with.... passing textile strollers who seemed disinterested in the bronzed bodies taking in yet more sun."

There are toilets and an NT-run cafe at Studland village and toilets at the car park near to the ferry.

OK. A few too many boats off shore at times, some seaweed, a non-shelving beach and no surf. The seawater meets the lower EEC Bathing Waters Directive standard. No routine sewage discharge.

Camping Facilities and Other Activities

Many who visit Studland choose to camp locally. Available sites include: 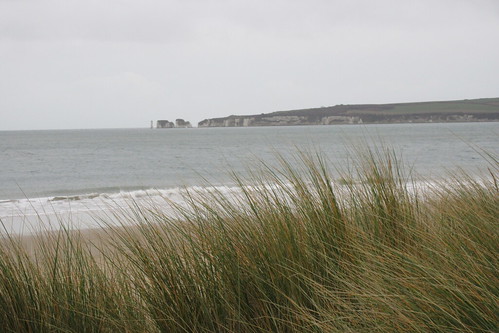 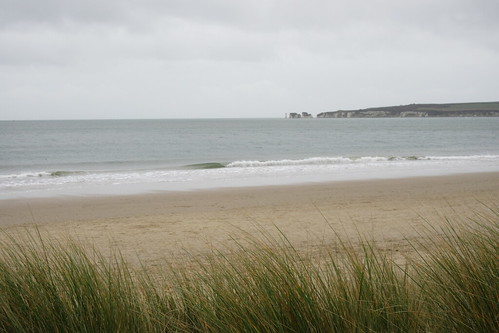 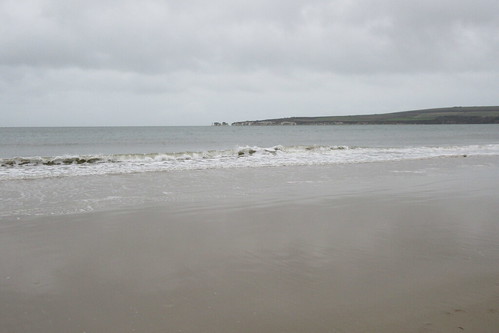 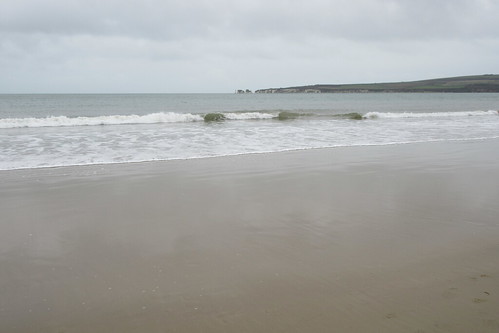 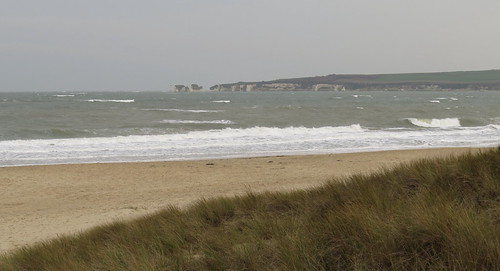 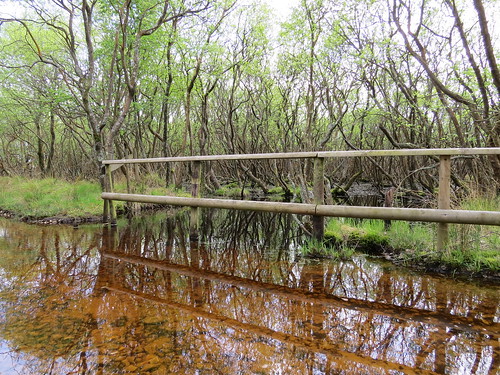 path to the beach 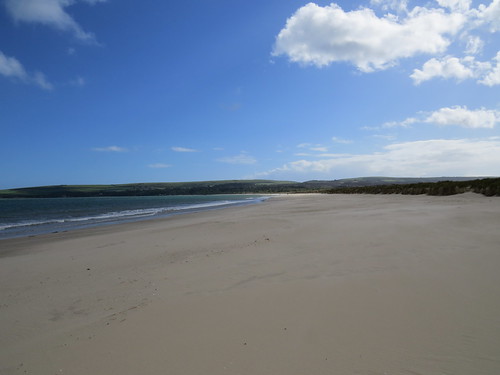 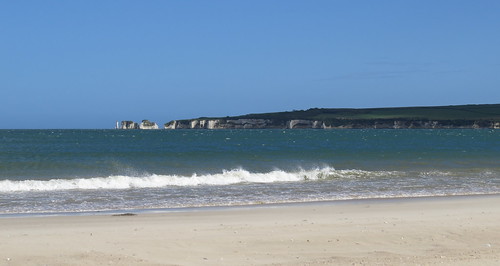 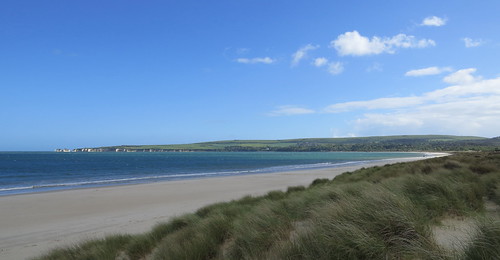 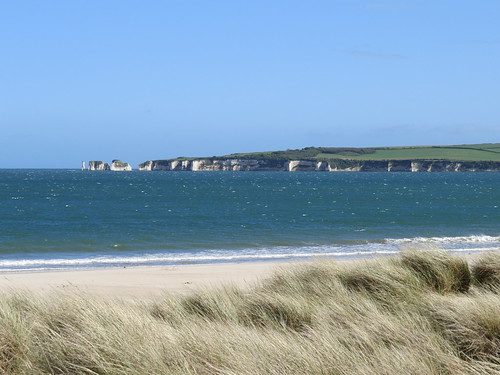